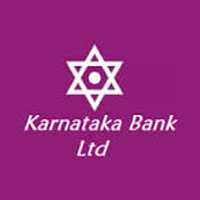 Salary: As per Standards

Age: As per Job Role

In the past, some fraudsters have cheated general public, promising employment in the Bank. Hence general public are requested to be vigilant in this regard.

Selection for employment in Karnataka Bank is done only by formal process involving advertisement in newspapers, written test and interview and is based purely on merits.

Bank is not responsible for any cheating/fraud in this regard.